In my condo I have a stacked front loading washer and dryer laundry center (by center I mean it is in a closet). I am not going to name brands (but it had fridgid in the name) because I actually have been informed that my long saga is due to front loaders themselves … however regardless when I purchase my new set for the condo I will own I will avoid this current brand to be on the safe side.

For the past few months some of my clothes have been coming out with these odd grease like stains – and at first I just thought that I had something in one of my pockets. Then about a month ago an entire load of clothes was RUINED! Clearly there was an issue with my machine.

I called a repair company in Toronto and of course they gave me a date with those much loved 3 hour waiting windows (luckily I live next door to my work). He came, say that there was a piece of metal in the plastic water pipe (clearly my appliance labeling skills are bang on 🙂 ) and a part needed to be ordered which would take just shy of a week. I gave the OK to order the part and the waiting game was one.

The following week he came, replaced the part, I ran 3 loads of nothing to flush out the grease and got started on my laundry (I was seriously running out of underpants). And of course as soon as the load of whites went in — GREASE!!!! so long favorite white pants! I was FURIOUS and DEVASTATED. 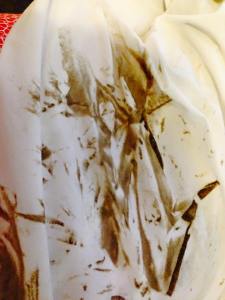 This is what the machine did to my sheets

The next day I called the company and they sent a new guy a few days later. He took one look and explained  – in what I now understand to be the reason why I will never own a front load washer again! Apparently they need to be cleaned – and wiped out regularly or the rust and crud gets caught up in the lining of the door. He showed me and yes – it was pretty freaking gross.

I have scrubbed, bleached and ran loads of just water and vinegar. I thought I was in the clear – until last night when I got grease on my 4th load (which once again is the whites — seriously WTF?). I am going to get an official washer cleaner product tonight to try add get rid of the remainder. Also I will avoid doing multiple loads a night because that seems to also be an issue. However I am counting down until I move out of this place (which I otherwise love) – 3 more months – and can leave this devil machine behind me.

I wrote this post for anyone who is in the market for a new washer or is new to the land of front loaders so they might be able to learn and not ruin some of their favorite articles of clothing like I did.

1 thought on “Fashion Disaster because of a front loading washer”